And the Winner is…


We are pleased to award the title of the 2018 Timberlane House of the Year to Pine Tree Retreat. Congratulations to our winner and thank you to all of the customers who participated and shared photos of their gorgeous homes! 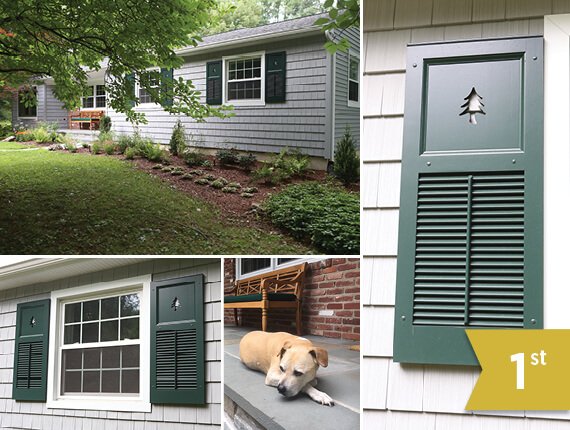 We have been renovating a simple Ranch on a heavily wooded property and needed something special to give the house some rustic charm. The Timberlane shutters with pine tree cutouts did just the trick! We adore them.
563 Total Votes

View all of the Participants…

Interested in seeing all of the beautiful homes submitted? There’s no end to the amount of creativity. Take a look at all of the stunning homes entered and get inspired!

This historic home was completed in 1815. Now it has been beautifully renovated inside and out. The Timberlane Shutters and Hardware help the original charm return to this historic home.

Our newly-built European (French) country cottage home’s appearance is enhanced substantially by the “real/swingable” custom colored Timberlane shutters. / We selected the shutter color by taking a photo of the house, cutting out shutter-sized rectangles and sliding multiple colors behind the photo. About 20 of our friends voted, with the shown color garnering about 70% of the votes!

This 1920’s home near the Rock River has been lovingly restored to its glory. Timberlane Shutters adorn the Cottage windows. Western Red Cedar Flat Panel shutters painted black are the focal point of the facade. Tapered strap hinges with decorative “Rat Tail” tie-backs add functionality and durability to enhance its ageless beauty.

Our children are the 4th generation of our family to live here! The Timberlane Shutters are a great compliment to the this traditional home!

Our slightly modern twist on colonial style architecture, our shutters helped put the icing on the cake and pop of custom color we needed to give us the end result we wanted. Being on an island in the Caribbean, we are exposed to harsh elements in particular, salt and UV. With the Endurian line from Timberlane, we are confidant that we will not have issues in our climate with these shutters.

We have a Europeans style center hall colonial. The granite that faces the house is real stone and we wanted authentic raised panel operating shutters on the front of the home. The shutters blend perfectly with the home style and the operating hardware gives the authentic appearance we were looking for.

CLASSIC BLACK AND WHITE!!
Lisa B.

Our renovation included turning our rambling cape cod into a colonial. The original shutters were board and batten functional shutters so we had to replace with something just as appropriate. We chose a louvered shutter for the top floor and paneled shutters for the ground floor. We also lined them in copper to match our copper roof on the portico. Perfection!

Grey limestone house made perfect into a beautiful comfortable Cottage looking home. The White cottage style look of the shutters help the house to stand out.

1985 bilevel. Purchased my timberlane shutters in 2017. They were awesome to work with. Couldn’t have been happier.

Deerfield is a ca. 1844 Greek Revival farmhouse in Upperville, Virginia. The farm currently includes about 232 acres of pastures and woods, with many outbuildings. Part of the Battle of Upperville occurred on the property during the Civil War and several of the Confederate wounded were brought to the house as Jeb Stuart retreated westward. There are Timberlane shutters on all four sides of the house, which include a pre-1860 extension off the back. We’ve owned the farm for 20 years and raised our kids here as we’ve worked to keep the house in as good (and original condition as possible). We have a photo of the McArtor family sitting on the same front porch in 1865 and the shutter look just the same, although we’ve replaced them all over time with Timberlane.

Ours is a “new old house” built in the Pennsylvania Farm House style, we have given it a distinctively 18th century Bucks County style in part through our use of Timberlane’s authentically styled shutters. Our shutters are fully operational with raised panel shutters on the first floor and traditional (and fully operational) louvered shutters on the second floor. Keeping the proper historical style was easy with Timberlane, as several of their designs are based on local bucks county historic homes.

In 1986 my father-in-law built this home for us, by hand, himself, to fulfill my husband’s lifelong dream. It has been a delight for 32 years. Last year we replaced the 28 original shutters with painted Timberlane mahogany shutters. They are more substantial than the home’s original ones. Plus, we were able to have the paint finish baked on by Timberlane, so we are confident they will look good for many years to come. Timberlane was a great resource to find. Our salesman, Bert, was a dream to work with.

102 year old home on the Southside of Poughkeepsie in New York’s Hudson Valley Region was remodeled to reflect the home’s original character and features Timberlane shutters with a tulip cut out design.

Completely remodeled a home from 1912… keeping true to its traditional roots. Same family lived here for over 60 years… Bringing back the life in this historic neighborhood.

We love our eclectic old family home perched on top of a hilly Knoll in Short Hills NJ! I grew up a few houses away and we leaped at the chance to buy the house a few years ago directly from the lovely older woman. The cottage style house has a mix of field stone, cedar siding and white washed brick. A durable and picturesque original Vermont slate roof complete with unique curved slate sweep roof in the back and beautiful old perennial gardens bordering our stream running through the front yard completes the look. The shutters were off the house completely when we bought it and I wanted to bring it back to it’s former glory, the house cried for its louvered shutters. Timberline shutters have brought our eclectic cottage back to life!

We acquired this 1997 ranch style home with 9 acres from an estate sale in Nov. 2017 just two weeks prior to my major surgery. As our general contractor friend was unable to take on the remodeling job, I became a general contractor with the help of my 22 year old son who is the beneficiary of this now fine home. My father was an Atlanta Homebuilder straight out of GA Tech so I grew up being around quality construction and was up for the task while on a pair of crutches. The house was really “dated” because of the original red brick and had a very basic look like you would expect out of the 60’s & 70’s although only 20 years old. I discovered Timberlane through research and most notably the remarkable positive reviews. We chose to convert the old ranch style home to the very popular craftsman style and had the need for Board and Batten v-groove shutters. We could not be more pleased with the quality and results. We also could not have done this job without the help of the many talented craftsmen who to date have contributed to our amazing transformation!

“Grey Wicket” is a newly-built house with an old soul, designed to pay tribute to the late 18th-early 19th century shingle-style “cottages” found in a summer seaside colony called Watch Hill, Rhode Island. In the front of the house, there is a tower with curved tall windows with diamond-muntins, a widow’s walk, two gambrel roofs, an eyebrow window, a bay window in the study, and small square windows on the garage, which are made charming by the addition of beautiful Timberlane fixed louver design (TR-1) mahogany shutters featuring 2″ louvers held in place by applied decorative ogee molding, hung with 10” tapered strap hinges and plate pintels and held in place with beveled “S” tie-backs. On the back of the house, which sits on the Great Peconic Bay, three gabled rooflines appear above classic rectangular windows, which are flanked by beautiful Timberlane shutters, painted in Benjamin Moore “Evening Dove.” Whenever we compare photos of the house before the Timberlane shutters were installed and then after, we are amazed at what a difference this finishing touch makes. Thank you Timberlane!

Ranch style home is a beautiful setting on the creek.

ONE STORY BRICK
Dorothea B.

This southern charmer has updated windows with Timberlane shutters in country red. The shutter really stand out on the red brick. We are please with the quality and beauty they bring to our home. I’m confident they will be around for as long as the house. A win will help a local non-profit that renovates homes in the area.

Remodeled Ranch – Custom Shutter drawings were done by Timberlane from a photo that I sent in and then the shutters were fabricated for our recently remodeled Ranch home.

BREAKING ALL THE RULES …
Les S.

: For my entry I would like to spotlight the back of the house. I also used Timberlane Shutters on the French doors in the yard and mounted lanterns right in the shutters …

This home combines Victorian and English-country influences to create a home that feels comfortable to anyone who steps inside. The exterior draws one’s attention to the details which have been enhanced by the Timberlane raised panel shutters in Envy Green. Originally built with contractor shutters in Hunter Green, there is no comparison to how this home has come alive with the new shutters!

TREAT AT THE END OF THE STREET
Tiffany B.

Our home is in the historic downtown area of Lake Forest, IL. It is a home that we lovingly built in 2016. We worked with the wonderful designers at Timberlane to design shutters that would perfectly complement the house. We made every effort to make sure the shutters were historically accurate in terms of size and installation placement. On the double windows to achieve this the shutters are double, open-folding. They are painted in Benjamin Moore’s Hamilton Blue which was the perfect color to add an older character to our new house! We love our shutters! Thank you Timberlane!

After a ground up renovation in 2016 our beachside home was finished off with Timberlane custom Bermuda Shutters topped with a Sailfish cutout. Installed on all east and south facing windows they provide needed shade from the hot summer sun and offer additional hurricane protection. The shutters complete the personality of our Key West style home.

Home features stone with tan and deep red accents with shutter color chosen to compliment the stone. Black hardware blends with black lanterns and front lamp post. Many compliments from the neighborhood.

This is a Connecticut style house built by the Gluek family in 1939. This was a third generation beer maker popular at the turn of the century. All of the shutters on the back side of the house have now been replaced with Timberlane Shutters.

PUMPKIN AND SPICE AND EVERYTHING NICE
Andrea M.

We chose Timberlane Shutters to restore the original design integrity of our 1920 Colonial home. The original shutters were long gone, and Timberlane provided painstaking reproductions.

Inspired by the coastal home style from the East Coast this fresh approach gives a more urban West Coast look with the help of Bermuda Shutters from Timberlane.