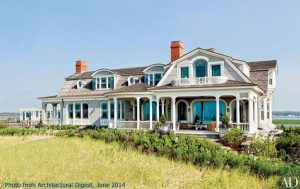 Timberlane Shutters are included on a custom home built by Robert AM Stern Architects in East Quogue, NY. The home is featured in the June 2014 edition of Architectural Digest.

Referring to shingled beach houses as cottages is an American tradition that often seems as affected as it is inaccurate, given the extravagant scale of many such residences found in East Coast summer enclaves. Yet the term is decidedly apt for a Shingle Style retreat that Gary Brewer of Robert A.M. Stern Architects designed in East Quogue, New York, for Manhattan-based clients. Working within the Long Island town’s height restrictions, on a 2.2-acre lot with 200 feet of ocean frontage, the architect created a handsomely detailed home that still manages to present a surprisingly low profile and snug ambience—despite clocking in at 9,500 square feet.

Stern, the dean of the Yale School of Architecture, famously revived the late 19th century’s romantic Shingle Style in the 1970s. “And then spec builders picked up on it,” says Brewer, lamenting the pallid imitations that now abound along the Eastern Seaboard. But the East Quogue dwelling, which was influenced by the work of McKim, Mead & White, the celebrated American firm that enriched the Victorian age with inventive houses clad in split cedar, has a truly authentic spirit.

See the Feature in Architectural Digest