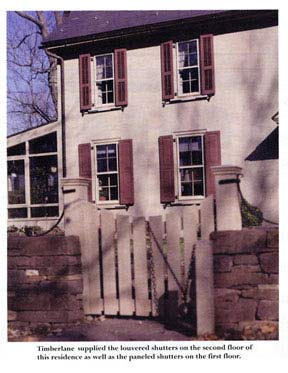 The desire to bring light and air into homes has resulted in a progression from the small casement windows of the First Period, to the more elaborate multi-lite window sash of the 18th and 19th centuries, and finally to the large uninterrupted glass panes installed in many new houses. As windows have grown larger, exterior and interior shutters and blinds have been used to provide privacy and security, prevent light damage to interior furnishings and finishes and regulate interior temperature and glare. The history of shutters and blinds illustrates their utility, versatility and appeal.

The terms shutter and blind both refer to hinged window coverings. Strictly speaking, a shutter is a hinged board or panel construction, while a blind has fixed or movable louvers. In general parlance, though, the distinction has blurred, and today the word shutter encompasses both types of covering.

Exterior shutters and blinds have been used from the 17th century to the present. Heavy single-board and board-and-batten shutter styles, which could be bolted and barred, were typical until the mid-18th century, when lighter, paneled shutters and louvered blinds became common. While shutters were usually paired on either side of the window, occasionally one shutter spanning the entire opening would be hung to one side.

Shutter subtypes proliferated through the 18th and 19th centuries, including bi-fold versions and “Dutch” shutters that split horizontally, so that the top half could be opened for light and air while the bottom was closed for security. More common in hot climates, awning blinds were hinged at the top of the window for maximum shade and air circulation. Exterior shutters were traditionally painted either black or dark green until the mid-19th century. The latter part of that century saw a transition to bolder colors and more elaborate custom designs, such as the pointed shutters made to shield Gothic Revival windows. Exterior shutters were attached with a variety of hardware, including strap hinges on pintles, locking mortise hinges and even wide-swinging H- or HL shaped hinges. An assortment of latches were used to close exterior shutters, but the most common devices to hold them open were shutter dogs, metal fasteners that turn on a lag screw or drive nail attached to the window sill or sidewall. A range of shutter dog styles were employed, from stars to darts to S-shaped hardware.

The functional use of exterior shutters declined late in the 19th century, as the combination of interior window coverings and exterior storm windows proved more convenient and effective. Although no longer central to the working life of houses, shutters remain popular decorative elements, framing window openings and providing depth and texture. Now that exterior shutters are almost always left open, they have transcended their original use and meaning to become a charming and welcoming detail. Even in the absence of surviving exterior shutters, windows, frames and sills often retain signs of shutters past, such as holes that once held hardware, built-up paint outlining patterns of shutters or hardware or surviving pieces of the hardware itself. By using these physical signs and historic photographs, missing exterior shutters can be replaced with great accuracy, restoring the grace that the shutters once brought to a façade. Today’s owners are savvy about the nuances of installation, pattern and material as they seek to reproduce the effect of historic shutters. Even if the shutters will never be closed, there is an increasing appreciation for the historic and visual authenticity of solid-wood shutters that are appropriately sized for the inside of the window opening, and hung on operable, correctly placed hardware.

Manufacturers of period and reproduction shutters and shutter hardware can attest to the expanding market for shutters as historically-appropriate details. “While there is a great trend toward using functional, wood shutters in new construction,” says Rick Skidmore, president and founder of North Wales, PA-based Timberlane, manufacturer of hand-crafted custom shutters, “renovation and restoration continue to be huge, booming areas for Timberlane.” Because of the great variation in regional types through time, Timberlane offers a full range of shutter styles and hardware that are based on regional examples. “In New England, louvers were wider than in other areas; in Center City Philadelphia, you saw ladder-style everywhere and then there was the difference between urban and rural versions, with more ornate shutters in the cities,” he says. There is a portion of the market that notices these differences and seeks the most accurate designs, he adds. “There has also been a lot of interest in custom shutters to fill special window shapes, pointed arches and ‘tombstone’-shaped windows.” Like all of the manufacturers, Timberlane “intends that the shutters will last a lifetime,” and uses traditional mortise-and-tenon construction to create solid-wood exterior and interior shutters.

Interior shutters, a convenient alternative to exterior shutters, were extremely popular from the 17th through the early-20th century. In their earliest form, they were used to keep out wind and rain in lieu of expensive glass windows. The most common early type consisted of a single panel that slid on a track running across the bottom of the window and the surface of the wall. This model was gradually refined, with single or paired shutters that could be slid out of sight into pockets in the wall. The most elaborate featured a second track halfway up the length of the window, so that a total of four panels could be adjusted as needed. While pocket shutters came to be called “Indian” shutters in the 19th century, their widespread use actually began well after settlers’ conflicts with native populations subsided.

During the 18th century, fashions changed and interior walls were brought further into rooms to cover exposed timber-framing members, creating deep recesses around window openings. The thick walls of masonry houses also had this kind of recess. Folding, paneled interior shutters were made to occupy this space, called the embrasure, as both functional and beautiful elements of the interior woodwork. These “boxed” shutters folded seamlessly into shallow pockets in the wall, creating a paneled surround at each window.

From the late-18th century through the end of the 19th century, louvered interior blinds were very fashionable window treatments. Those with narrower slats were available in the same configurations as paneled shutters, such as the Dutch and bi-fold styles. One creative type had multiple panels that slid vertically, held in place by pegs or clips to cover the window, or concealed behind window seats when completely open.

Historically, the term Venetian blinds was applied to any number of interior and exterior treatments, but it now connotes any louvered interior blind with movable, wide wooden slats, either set in a frame or suspended on cloth tapes from the top of the window. Venetian blinds were prized because they could fan out to fill the semi-circular shapes of fanlights or Palladian windows. Early versions often had clear finishes to expose the wood graining, but they soon began to be painted dark green or black like their exterior counterparts.

While all of these exterior and interior window coverings are fundamentally simple in concept, for centuries they were essential to maintaining a comfortable household. Today, they evoke a time when striking the balance between shelter and nature was a manual, circadian ritual. Though their role has changed, they retain their significance, both as examples of changing tastes and technologies, and as beautiful architectural details.