The Best Shutters For Old Houses

The exterior shutter is a mainstay of houses built in America over the last three centuries, so the thinking goes. Versatile, architectural, and often a welcome color contrast to the façade, shutters can let in light and air, or be secured to protect the house in bad weather. It might come as a surprise, though, to hear that many homes from the colonial period forward were not only built without shutters, they were never meant to have them.

So what’s right for a given house? Very early houses (before 1750) rarely had outside shutters. Any that appear on the house may be later additions; truly old ones have obviously become part of the house’s history, while those that are the wrong size or style should be replaced.

Exterior shutters are often absent on Georgian style houses such as Drayton Hall (1738) near Charleston, South Carolina, a house famous for its intact interior shutters. Georgian-era shutters are usually in the raised-panel style. While two vertical panels per shutter is typical, some may have three or even four, like the shutters on the 1765 Powel House in Philadelphia, which display four panels per shutter on the lower floors and three panels for the smaller windows on the third floor. 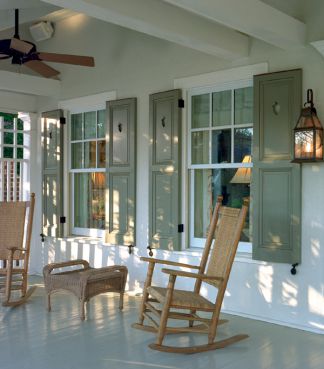 Shutters for Federal style houses (built ca. 1780–1820) continued in the same vein—present in some cases, absent in others. Raised-panel shutters are probably most common, although the more versatile louvered style appeared, too, usually on upper stories where privacy was less of a concern. In some instances, houses built without shutters got them later on in life. Boston’s 1797 Otis House initially was devoid of shutters, but early 19th-century owners added louvered ones, which remained on the house until 1916. (As the headquarters of Historic New England, the house has since been restored to its original, shutter-free appearance.)

As house styles changed more frequently in the 19th century, the presence or absence of shutters depended in large part on geographic location and the architectural embellishments on the front façade. In general, shutters tend to be more common in the hotter, wetter South, especially on floor-to-ceiling ground-floor windows on Greek Revival, Gothic Revival, Italianate, and Queen Anne style homes. Board-and-batten styles were favored in formerly French locales like New Orleans.

Shutters went missing altogether on houses with ornate architectural window details (Second Empire, for example), or where windows are grouped in twos or threes, as in the double bay windows of San Francisco Stick Style houses. That said, there are examples of historic shutters that fit the arched or round-top windows of Gothic Revival and Second Empire styles.

Certain 20th-century styles also seem to be shutter shy. They are rare on Prairie and Arts & Crafts houses, possibly because windows tend to be ganged together in rows under an architectural header, which tends to “finish” the windows as shutters do for other styles. They’re also seldom seen on Tudor Revival houses with elements like half-timbering or groups of arched windows.

Colonial Revival houses (1895–1940), one of the most prevalent 20th-century styles, single-handedly revived raised-panel shutters. Colonial Revival spin-offs include the cutout shutter craze of the 1920s and beyond, as well as combination shutters that incorporate both louvers and panels into the design. (Plain louvered shutters are also popular on Colonial Revival styles from Georgian Revival to modest Capes and cottages.)

Whether or not shutters are right for your house depends on a combination of its architectural style and date, historic evidence found on the house, and personal taste. Some houses look equally good with or without shutters—and others look dramatically better when shutters are added. Once you’ve considered options that best suit the age and style of your house, take a good, hard look: Does the house appear finished as is, or could it benefit from the architectural relief and contrast shutters offer? That should help make your decision easier.

Published in: Old-House Journal May 2014