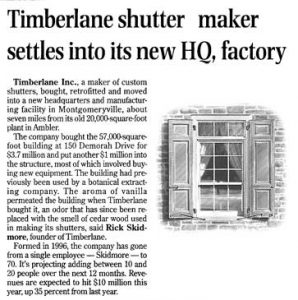 Timberlane Inc., a maker of custom shutters, bought, retrofitted and moved into a new headquarters and manufacturing facility in Montgomeryville, about seven miles from its old 20,000-square-foot plant in Ambler.

The company bought the 57,000-square-foot building at 150 Domorah Drive for $3.7 million and put another $1 million into the structure, most of which involved buying new equipment. The building had previously been used by a botanical extracting company. The aroma of vanilla permeated the building when Timberlane bought it, an odor that has since been replaced with the smell of cedar wood used in making its shutter, said Rick Skidmore, founder of Timberlane.

Formed in 1996, the company has gone from its single employee – Skidmore – to 70. It’s projecting adding between 10 and 20 people over the next 12 months. Revenues are expected to hit $10 million this year, up 35 percent from last year.

Originally published in print and on the Philadelphia Business Journal website.