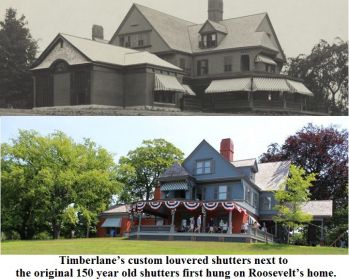 Montgomeryville, Pa., August 4, 2015 — Timberlane, Inc., a company providing custom exterior shutters and hand-forged hardware, now has its handiwork featured on the newly renovated Sagamore Hill home in Oyster Bay, N.Y. Sagamore Hill is the former home of President Theodore Roosevelt. In June, the National Park Service announced that the house would reopen to the public on July 12 following a complete renovation that included replicas of the exterior shutters that were first used on the home when it was built in 1885.

“As a company that prides itself on our work on historical renovations, it’s been truly remarkable to be a part of the Sagamore Hill project,” said Rick Skidmore, CEO and president of Timberlane, Inc. “The work that the National Park Service has done is tremendous, and we feel fortunate to have played a part in it.”

Sagamore Hill was the home of Theodore Roosevelt, 26th President of the United States, from 1885 until his death in 1919. During Roosevelt’s time in office, his “Summer White House” was the focus of international attention. Named after the Indian chief Sagamore Mohannis, the home boasts 15 bedrooms and three bathrooms, along with offices, sitting rooms, and a large porch on 83 acres of land. For more information, visit http://www.nps.gov/sahi/index.htm.

Founded in 1995 and headquartered in Montgomeryville, Pa., Timberlane produces custom exterior shutters and hand-forged hardware, renowned for their exceptional quality. Timberlane products are routinely requested by the highest caliber of architects, historians, preservationists and selective contractors throughout the country and beyond. With a vast number of options for standard shutters, including panel configurations and cutouts, in addition to full customization and matching capabilities, Timberlane fulfills even the most exacting needs and specifications. Timberlane also offers the largest collection of hand-forged and period-perfect shutter hardware available, including shutter tie backs, hinges, and more. For additional information about Timberlane’s custom exterior shutter selections, visit www.timberlane.com.