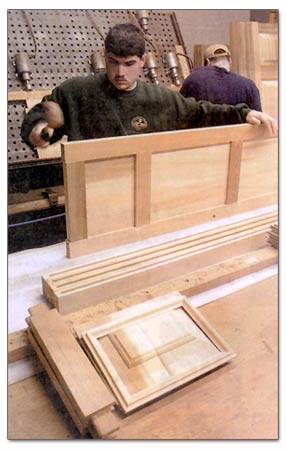 When Darren Meehan went to see the new movie “Divine Secrets of the Ya-Ya Sisterhood,” it wasn’t Sandra Bullock or Ellen Burstyn that caught his attention during a pivotal scene.

It was the 6-foot-plus, handmade Bermuda Style shutters on a house pictured on the screen with the two actresses.

The historically accurate shutters — complete with wooden pegs instead of nails, and hinges and other hardware, made by area blacksmiths — were built by Meehan’s employer, Timberlane of Upper Gwynedd, and featured on a house in the movie about the complex relationship between a mother and a daughter.

“At the climactic moment, it was these two women and our shutters,” said Meehan, the marketing coordinator for the 6-year-old company on Wissahickon Avenue.

Company president Rick Skidmore said he too saw the movie–and the shutters. “It was certainly a proud moment,” Skidmore said of seeing the company’s product on the big screen. “We’re a really good team. And it really reinforces our sense of pride.”

Timberlane’s shutters will make an appearance in another movie due out in the fall, “Tuck Everlasting.” This time, it will be a number of louver shutters — large wooden shutters with smaller pieces of wood forming two panels — that will grace the big screen in this movie about a little girl who discovers that her neighbors have the fountain of youth.

Timberlane specializes in making shutters the way they used to be made —by hand and using wooden pegs and blacksmith-crafted hardware.

Providing shutters for these two movies was just part of what Skidmore call its exponential growth and exposure.

“We’re doing a good job, and word is getting around,” Skidmore said. The company has crafted shutters for the British Embassy in Washington, D.C., and for Yale University in Connecticut, among other places.

For the “Divine Secrets” movie, the production studio bought the shutters and the homeowner bought all the hardware (and kept the shutters after filming was finished), according to Meehan. Around this time last year, Timberlane was contacted about supplying the shutters for the movies, according to company sales representative Jim Aldredge, who handled the requests.

After orders were placed, they generally had a three-week turnabout, said Wayne Kuser, the production manager for Timberlane. According to Kuser, the company — which custom-crafts its shutters – didn’t have to go too far outside of the realm of the historically crafted shutters it normally makes. “We take a lot of pride in processing our shutters,” Kuser said. “And when the whole company has an opportunity to do something like this, it adds another dimension.

“It’s our brush with Hollywood,” Alredge said with a smile.

Timberlane started almost seven years ago in Doylestown. Skidmore, who said he was a weekend woodcrafter, saw that the house needed new shutters but when he went looking for companies that provided them, he found nothing. So Skidmore, who was working for MetLife, an insurance company, at the time, decided to build the shutters himself. And when he looked around the neighborhood and noticed that other houses had similar shutters, “It was kind the of birth of the company.” “And from that point forward, it was a hold-on-tight kind of ride,” he said.