A local company with humble beginnings is growing into a giant. 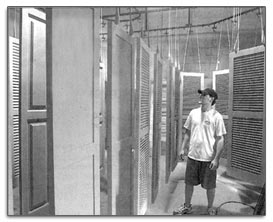 Timberlane began after Rick Skidmore, now company president decided to restore an old house in Doylestown. The house’s shutters were rotten, he said and he wanted to make his own shutters to match the house. Skidmore, who learned woodworking as a kid and had a wood shop in his basement, searched for a product after which to design the shutters.

“There wasn’t enough resources and designs…that’s when the light bulb went off,” he said. Skidmore, who specializes in sales and marketing, said he saw a void in the market. The concept of producing a good-quality product that has a high demand, seemed like a good base for a business, he said.

In 1995 Rick started Timberlane. His father, Richard, provided an invaluable hand and still builds shutters at the company. “My father’s a master woodworker. As a boy, I kind of hung out in his shop. He taught me what I know, he said. “Quite frankly, I wouldn’t be here…His 30, 40 years of experience was completely invaluable,” Skidmore said.

The business took off. After the first year, Skidmore had hired about seven employees. Today the company employs 40 at the 20,000-square-foot facility at 197 Wissahickon Ave. Timberlane gets orders for shutters from all over the country. “Our biggest market is in the region, even though we’re a national mail-order-catalog,” he said.

In this region, Timberlane has provided shutters for many houses on the historical register. The hardware, used to hang the shutter, is also historical accurate. “There’s a very, very strong restoration movement that’s been going on for a long time, he said.

The shutters are custom made of kiln-dried western red cedar, which allows for greater stability, according to the company. (There’s) a lot of handholding that goes on in manufacturing a shutter,” he said.

Skidmore said a pair of Shutters normally costs about $200. However, he said large, highly customized shutters can run nearly $1,000. Timberlane provided custom shutters for the British Embassy in Washington, D.C. The company has also worked with the television show “This Old House.”

“We are the industry leader in this right now,” he said.

During the tour of the manufacturing shop, Skidmore explained the manufacturing process. “It starts to flow through the rest of the process here,” he said from the milling area. “In the middle of the day, it’s buzzing with activity.” Skidmore said that his company has exacting quality controls.

“If it’s not perfect,” he said, “It basically gets rejected.”