In this Real Time Economics post, WSJ Editor Timothy Aeppel reveals the outcome of a recent survey done by the Young Presidents’ Organization. His post provides insights from a few of the participants, including Timberlane’s Rick Skidmore. 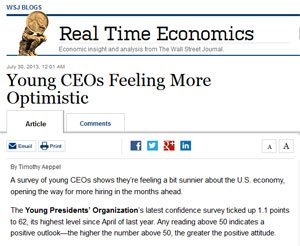 Wall Street Journal Real Time Economics Feature The Young Presidents’ Organization’s latest confidence survey ticked up 1.1 points to 62, its highest level since April of last year. Any reading above 50 indicates a positive outlook—the higher the number above 50, the greater the positive attitude.

Nearly half of the 746 U.S. CEOs surveyed by the group said business and economic conditions have improved in the last half year. CEOs in the construction sector particularly upbeat: 65% said conditions have improved–up from 46% three months earlier. The survey is done quarterly. Across the board, smaller companies were more likely to see improvements than larger companies.

The CEOs were more optimistic in their outlook for sales than for hiring or capital spending. A hefty majority—62%–said they expect their sales to increase over the next 12 months. But only about four in 10 said they expected to add workers in the next year, a slight improvement over the previous survey. On the opposite end of the spectrum, only 3% said they expected to cut jobs by up 10% or more in the months ahead—down from 6% who indicated that three months earlier.

“We’re in a strange time,” says Rick Skidmore, CEO of Timberlane Inc., a Montgomeryville, Pa.-based maker of custom shutters, who participated in the survey, “because everyone’s tentative. We’re all wondering if this is another blip or something more sustainable.”

Timberlane’s business is up 18% so far this year, aided by the revival of the housing industry. “New construction is definitely starting to pick up some speed again,” says Mr. Skidmore, “but it’s nowhere near where it used to be” before the recession.

Another survey respondent, C. Davis Nelsen II, was less upbeat. “People are afraid to make investments,” says the CEO of Nelsen Steel Company LP in Franklin Park, Ill. “Nobody wants to place a bet when they don’t know what the rules will be tomorrow.” Mr. Nelsen says his company is continuing to lose customers to foreign producers, who view the U.S. as a relatively healthy market for selling steel. “I’m not saying the foreign producers are dumping in the U.S.,” he says, “but it’s eating up our customers.”